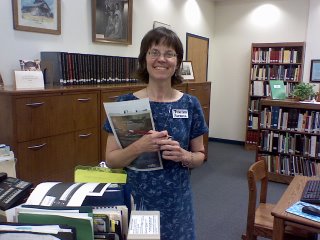 My friend, genealogist, and Monroe librarian. The Dickinson Room at our local library is filled with genealogy books, files and local history. Patricia keeps the room well-stocked with the latest journals on the subject and schedules interesting speakers and workshops. Not content to sit just sit at the desk, she also prowls the county looking for old, historical grave yards; transcribes inscriptions; and takes pictures of some of the more interesting tombstones. Check out her blog at: http://www.randomnotes-patriciacarol.blogspot.com/ Update: Pat's blog was removed. To see some of her tombstone pictures, go HERE.

Incidentally, our library allows patrons to access the national Proquest database of genealogical data at their home computers. All one has to do is obtain a library card, ask Patricia for a password, and then log onto the library's web page. Patrons can also access some of the major databases at Ancestry.com. But, you will have to visit the library and use their computers for that particular feature. 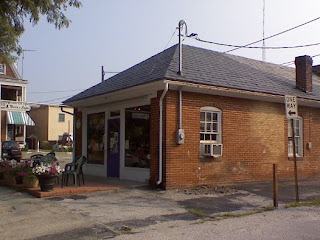 I'm sitting at an outside table contemplating the 90+ degree temperatures looming ahead for the day. I'm glad this coffee house is only a few blocks away from my mother's new senior community which she moved into last summer. Hanover in the morning is just a small Pennsylvania village. Lots of locals come by to have a cup of java and chat with each other. I've only been a few times, but each time I have bumped into one of the regular customers who also likes to ride bicycles. He biked to the cafe one morning.

Though I am not very fond of cats, the cafe owner is. He is a sort of a local clearing house for cat adoptions. Inside, one can find picture albums of potential adoptees. 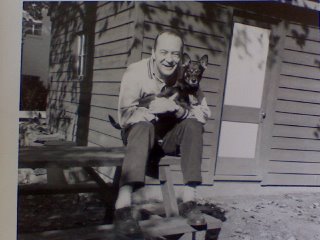 In memory and celebration of loved Father's everywhere. Robert Carl Kramp, born Strike, 1918-1974. And Rascal.
Posted by Bob Kramp at 8:21 AM 1 comment: 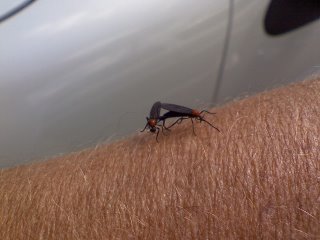 Reason these bugs are not too bothersome, ie. drawing your blood, is that they are too busy copulating with each other- even in flight. Make love; not war.
Posted by Bob Kramp at 10:26 PM No comments: 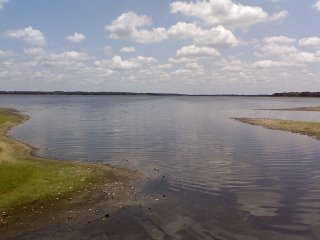 One of two shallow lakes at the park. Took Tram ride through back roads. Saw 'gators, Wood Storks, deer, and Sand Hill cranes. Since Florida has been under a long-running drought, there was not enough water to take an airboat ride. The airboats need about 18 inches of draft; so, that's why we wound up on the tram ride instead.

This wasn't my first trip to Florida, but it was my first trip as a 65 year-old senior who really can't get around on his legs as much as he used to. Since I was in my 40s, I longed for the opportunity to be able to hike to my heart's content. I dreamed of walking the Appalachian Trail. However, with a torn cruxiform ligament in my right knee plus chronic arthritus around the joint, my dreams of long distance hiking have been pretty much dashed. Fortunately, I can still ride a bike. MOF, I can ride a bike better than I can walk. I use different muscles I guess.

Thus, I am impressed by the flat land and the scenic wildlife rides which are abundant around Englewood, such as Mayakka State Park. The park is just a short car ride from my brother's. In the park, there are lots of opportunities for bicycle riding: a 7-mile scenic drive and many miles of dirt roads into the wild interior. I can still get back to quiet nature here and get away from it all.

By the way, I did visit Myakka River State park when I was relatively young and could hike long distances. Way back in 1988, I went backpacking for a few days on a circular trail in Myakka. I remember setting up camp one night; firing up my backpacking stove and eating dinner. Just as the sun went down, I was swarmed by mosquitos. It was unbelieveable and even more frightening. I was able to dive into my tent and zip up the fly just in time to prevent losing gallons of blood. I also saw wild hogs on that trip.

Just so I won't forget the opportunities here: 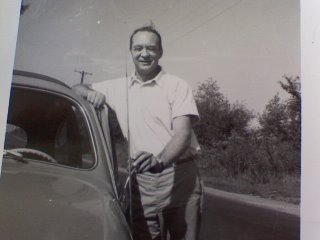 I had to sneak into my brother's shoe box of old photos to retrieve this one of Dad, copied & posted by new cell phone. Gotta get 'em where ever you can. Photo was taken Fall 1961. It would be nice if our family and relatives could loan us their prized photos so that we could scan and incorporate them into our genealogy database, but that is not often the case. I believe this new cell phone with camera might do the trick.
Posted by Bob Kramp at 7:43 PM No comments: 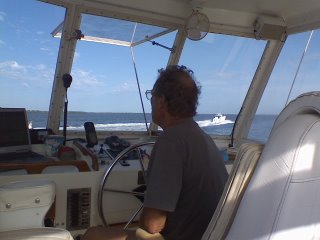 Captain Russ (Bro Billy) celebrated 63rd B-day at Cayo Costa State Park today. We hiked across barrier island to swim in Gulf; then with porpoise in Pelican Bay.
Posted by Bob Kramp at 10:28 PM No comments: 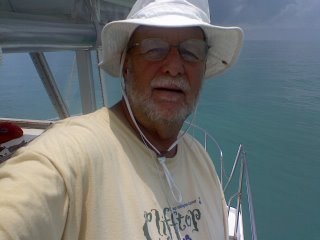 On the 70 mi. leg from Shark Rvr to Marco Island (Johnson Bay), a porpoise swam under our boat; turned on his side; and winked at me. I waived back and complained abt the heat and humidity.
Posted by Bob Kramp at 10:17 AM No comments: 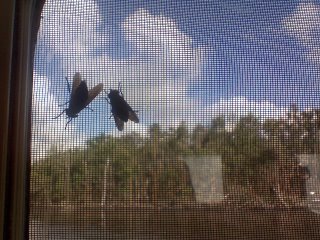 Horse flies are as big as trees at Shark River anchorage. They wait patiently for their blood meal to walk outside. Actually, bigger problem are the no-seeums.
Posted by Bob Kramp at 10:02 AM No comments: 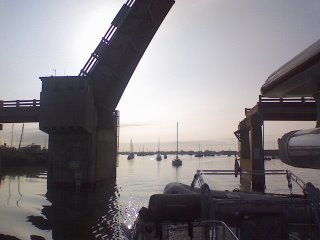 Departed Boot Key Harbor in Marathon, FL. Bridge was drawn for sailboats behind us. Cruised 45 mi. to Shark Rvr, near Ponce de Leon Bay in Everglades Natl Park
Posted by Bob Kramp at 9:54 PM No comments: 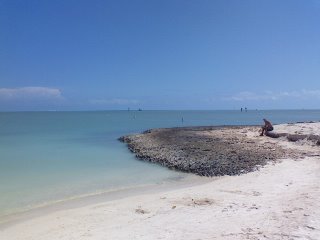 Billy and I took a swim in the cool salty waters at Sombrero Beach on Atlantic side of Marathon Key reached via Sister Creek.
Posted by Bob Kramp at 3:26 PM No comments:

View from US 1 in FL Keys toward the Gulf 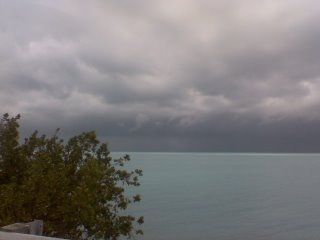 Arrived in Tampa during tropical storm Barry. Next day, drove east to toward Miami and then south on US 1 over the Keys to Marathon. Boarded the Poken. We leave Monday for Everglades, gulf side; then up the coast to Englewood, Sarasota County.
Posted by Bob Kramp at 10:06 PM 1 comment: 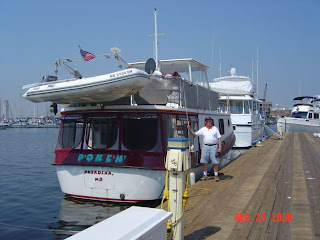 Oops, something came up and I will not be returning to my home in NC this week. Instead, I will be joining my brother, Russell (Billy to me), on a trip around the Florida Keys on his boat "Poken", from Marathon, FL, on the Atlantic coast to near Tampa, FL, on the Gulf coast. Trip might take 6 or 7 days or more depending on the weather. I will fly out this afternoon, June 1st to Tampa, and return June 15th to Baltimore, MD.

Picture was taken last August, 2006, of my Uncle Edward Gailliot. We boated around the Chesapeake Bay, MD, for a short week. This was the first long visit in years among my brother, Uncle, and I. Nothing like a long boat ride to bring us tightly together again.

I wonder if I will be able to post a picture message to my blog via my cell phone. If I can, best for you to return later after I have an opportunity to edit the posts.

Ahoy and Bon Voyage to moi (or nous?)
Posted by Bob Kramp at 8:25 AM No comments: 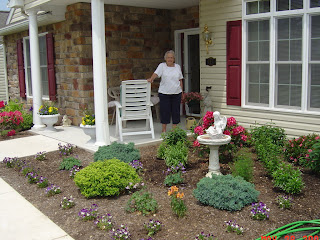 Before leaving Maryland and Pennsylvania to return home to Monroe, NC, I took this picture of my mother working on her "Heritage" garden. During the last few days, we have transplanted some of the perennials from her former house to her new cottage in Hanover, PA. She has some beautiful, deep purple-colored Iris. 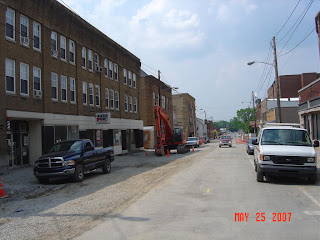 Front Street (the main street) of Philipsburg, Centre Co, Pennsylvania, is being practically reconstructed. However, the Philipsburg Historical Society is active and open on Mondays, 2 to 4, and Thursday evenings, 5 to 7. Find it on the third floor of this building(left) at 203 North Front St., above barber's rotating column.

One of my brick walls came crumbling down as I found obituary of Leah, born Lewis, the wife of Julius Streich. Family tradition indicated that my grandfather's brother, Julius, married a girl and then abandoned her shortly thereafter. They said, "He went out for a loaf of bread and never came back".

From the Philipsburg Journal, 2 Feb 1929: "Former Resident Dies in Austin"

"Besides her husband, she leaves a little daughter, Marcia, aged 7 years, a daughter and son by former marriage. Her aged mother, Mrs. Eleanor Lewis and three brothers, Henry, William, and Samual Lewis."

"Mrs. Lininger still retained her membership in the Church of Christ, Philipsburg [PA], but since moving to Austin attended the Methodist Church and was a faithful member of the Gleaner Sunday School Class. She was also a member of the WCTH, The Rebekah Lodge, and Rose Klan, holding offices in these organizations at the time of her death. She was a woman of many pleasant graces and of an unusually cheerful disposition and to know her was to love her. Funeral Services were held in the Austin Methodist Episcopal Church on Sunday afternoon, Jan 27th with burial at Emporium [PA]."