Postcard-Statue of Liberty: Did my immigrant ancestors see the real thing

This month's theme for our group of genealogical postcard collectors was "LIGHT"- such as moonlight scenes or anything with the thought of light, even light-hearted postcards.

But, I chose a serious and important landmark of our country which represents the essence of my immigrant ancestors' lives and dreams- The Statue of Liberty- which is officially titled "Liberty enLIGHTening the World." 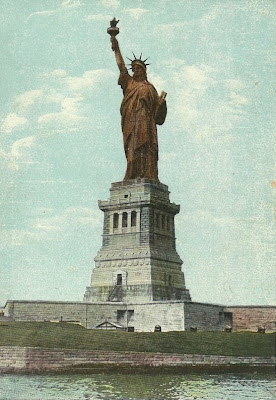 On the reverse, the text indicated that two women wanted to exchange postcards of subjects representing the states of New York and Maryland. There was no date indicated. I believe I purchased the vintage postcard at an antique shop. 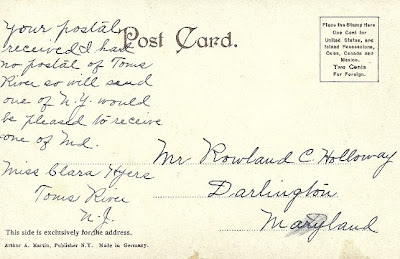 The vintage postcard above shows that the Statue of Liberty had a bronze tint. That was because the statue was cast in thin sheets of copper about 3/32 of an inch thick. The Statue was sculpted by a crew directed by Frederic-Auguste Bartholdi who was born in Colmar, Alsace. It so happens that my maternal great grandmother, Marie Gutgsell, was born in nearby Wintzenheim, in Alsace.

The appearance of the statue's "skin" in modern postcards, or as I saw it with my own eyes on a trip in 1997, appears greenish colored. And of course, just as a penny will turn green if left outside in the elements, the "Lady" also became tarnished as she looked out over New York Harbor for many years. If one knew how long it took for the Statue to become oxidized, that is, turn from a bronze tint to a light green color, it might be possible to date this particular postcard.

The internal supporting steel "skeleton" was designed by Alexandre-Gustave Eiffel- the same person who designed the Eiffel Tower in Paris.

The Statue of Liberty was a gift from the people of France to the United States. Thousands of dollars were contributed by the common people of France to build this tower. The idea was that France would donate the Statue if the Americans would finance the building of a pedestal on which to place the sculpture. The Americans balked. They considered it New York's Statue so they believed that state should pay for it. However, Joseph Pulitzer who was an immigrant from Hungary and who had become a famous journalist and publisher in America, challenged the people of our country to come up with the funds to build the pedestal. He even promised to publish the names of contributors in his "World" publication. It worked.

I believe most people believe their immigrant ancestors were elated at seeing Lady Liberty as they first arrived in America. However, the Statue of Liberty was not opened until Oct 1886. By that time, most of my German-born ancestors had already been processed through Castle Garden. Not even Ellis Island, the off-shore processing station, was opened until 1892.

Most of my Kramp, Streich, Hohnke, Russell, Hartley, Gailliot, and Frederick families immigrated to America between 1881 and 1886. However, at least one of my branches, the Austel Line, arrived at a later time in the New York port in Fall, 1903, and thus, came sailing by the Statue of Liberty on their way to Ellis Island. I wonder what they felt in their hearts. I know what I felt when I passed by on a ferry boat in 1997.

Christening of my 2X great grandfather, William Hartley, and his daughter, Eleanor

The following image depicts two Anglican churches of County Durham in northern England which are pertinent to this entry. The page is copied from a booklet entitled, "Churches of the Diocese of Durham", which I purchased in the Durham Cathedral shops in 1996. I did not know at the time how they would precisely fit into my family's history. 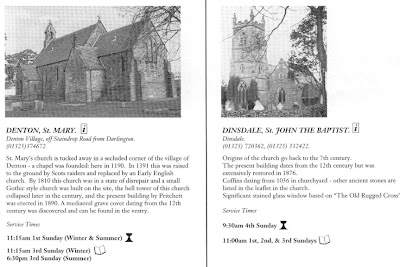 While I still have the tourist map of County Durham, England, at hand (see previous entry), I want to pinpoint a few other places which are significant to my HARTLEY Family Line. On the bottom, right-hand quarter of the map (enlarge by clicking on image), and just to the west (left) of Darlington is a small village called Gainford. It is the namesake of a larger ecclesiastical region known as GAINFORD PARISH. Slightly north-east of Gainford, I drew a small red-colored circle marking an even smaller village named Summerhouse (indicated by "Su"). If you search for Summerhouse, Durham County, England, on Google maps you can zoom-in for a wonderfully detailed view of this small village especially on the so-called Satellite view. While there, look just slightly east (to the right) of Summerhouse, across a major highway and you will see Denton. The Anglican Chapel at Denton of the Gainford Parish is located there and is the place where my 2X great grandfather, WILLIAM HARTLEY, was baptized in April 1821 by Thomas Peacock, Curate. William's parents were William Hartley, Laborer, and Ann Longstaff, residing in Summerhouse.

About 24 years later, in the same chapel of Denton, which is called St. Mary's, William and his wife, ANN ROBINSON, baptised their 3rd-born child who was my great grandmother, ELEANOR HARTLEY. Eleanor was baptised 21 Jun 1845, by John Birkbeck, Curator.

The following description is taken from "Keys to the past":
"Denton, St. Mary's church."
"This small church was built in 1891, replacing an earlier church built in 1836. The church is built of sandstone and has a small porch and side chapel to the south. A stone coffin is used as a drinking trough for animals in the churchyard, and the remains of some medieval gravestones can be seen in the porch."

William Hartley and Ann Robinson baptised two other children in the nearby church of St. John the Baptist, at Low Dinsdale: Jane Elizabeth Hartley, on 23 Mar 1851, and Thomas Hartley, 14 May 1852.

In my Picasa album, I have pinpointed on a map the location of the village of Denton and its Chapel. You can follow the link here. Reminder: I have used Picasa's mapping feature to locate many of the images which appear on this blog.