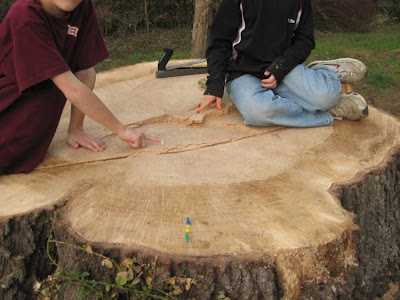 What do you do with a big stump in your backyard? Make a Time-Line of course. Supposedly each growth ring marks one year as the tree trunk grows outward. They say that a thick growth ring means there was plenty of rain that year; a thin or group of thin growth rings, means drought. Also, I noticed that the center of the concentric rings of the trunk was not exactly in the center . The trunk was skewed so that thicker growth rings were toward the southern exposure. Does the tree grow faster on the sunny side of its truck?

In any case this was an old, big oak. My grand kids came over and we placed push pins into the exposed trunk to mark their birth years, young. The pins representing the parents' ages were mid-way on the trunk where the kids are pointing. And finally the old man. Egads! closer to the center. We didn't count all the rings, but I estimate the tree was about 90 to 100 years old- and no, I'm not THAT old.

Incidentally, the common name of this tree is called "Willow oak". Where is that forestry Professor? I will have to get back to you to give you the scientific name.
Posted by Bob Kramp at 2:57 PM No comments: 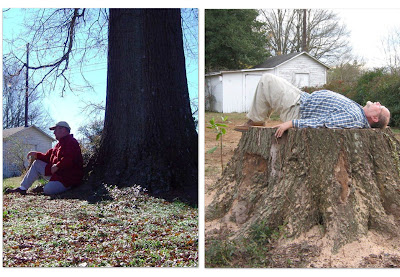 I was devastated when my big oak tree was killed by a lightning strike the summer before last. First, there was just a large "w" shaped line of dead leaves going through the lower branches. I was suspicious of a large, vertical rip in the bark that went from the base of the truck to high in the branches. Then, this past Spring, the giant tree did not leaf-out. Even then, I refused to believe it was dead, because I really loved this tree. Maybe it was a late bloomer- a late leafer. Furthermore, it was the respected grandfather of our Sterling Park neighborhood. I used to sit peacefully and protected under its huge, spreading branches and contemplate my "New Chapter in Monroe". The big oak had become a part of my life. But finally, I had to declare it deceased, particularly, when one of those huge branches fell down on the fence between me and my neighbor and slashed the power line in half so it lay on the ground, sparking and crackling. Duke Power was called in to splice the line together. By the way, I was on Thanksgiving holiday in Maryland when it happened.

A few months ago, I talked to a contractor who was removing branches from the right-of-way for the power line in my backyard. He told me that dead trees like my big oak usually didn't just fall over. Instead, they would drop their limbs one by one after being weighed down by rain and ice or bent to the breaking point by the wind. Since it was going to cost several thousand dollars to cut it down, I thought I would wait for the slow demise of the tree's branches hoping that I would be buried before it was. However, I heard a frightening story from a former forestry professor at Virginia Tech. He was called in to testify at a court proceedings in Virginia in which a man was suing his neighbor because a branch from a dead tree in his yard broke off; went through the roof of the car the man was seated in, and maimed him for life. The case was settled out of court for millions of dollars. DOWN came my beloved big oak. My Social Security benefits could pay off thousands but not millions. Who am I kidding: SS benefits can't hardly pay my heating bill. But then, there is always the wood stove. 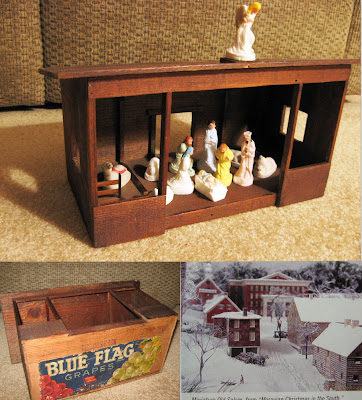 I learned a new word this past Xmas season: "PUTZ". It comes from a group of early German immigrants called Moravians who gave us many Christmas traditions. The term referred originally to a nativity scene placed near the Christmas tree- or, what the Germans called a Tannenbaum. It included figures of the magi, shepherds, the three Kings, and stable animals like donkeys, sheep, and the exotic camel. Later, the Putz evolved into other types of seasonal, winter scenes with houses, light poles, fences, and little figures of people and pets. My mother used to place a large piece of matted cotton on the floor which represented snow and then placed a round mirror on the "snow" for an ice-covered pond. There is more history to this story in the magazine, "Carolina Country", December, 2007, page 13. The article included a picture of the miniature village scene shown here in the accompanying collage- the right bottom corner (click on image to enlarge). The other image is of a stable my father made from the thin boards of a packing crate for produce- apparently Blue Flag grapes. They use cardboard boxes to ship produce nowadays.

The Moravians were a protestant christian group led by a Catholic priest, John Huss. They sailed from Germany in the first quarter of the 18th century and landed in Georgia, but migrated north to Pennsylvania and settled there. However, a few years later, a group of Moravians moved to North Carolina, bought land, and built a community which they called Wachovia after the River Wach in their ancestral homelands in Prague. Here they established a bank called Wachovia and set up an account for me. Ha, just kidding- However, this is indeed the namesake for one of the largest financial institutions in America today. It was founded in the former community of Wachovia which grew into the metropolis of Winston Salem, North Carolina. The Moravians still run a living history museum in Salem, NC. I've been there once- to make a withdrawal.
Posted by Bob Kramp at 12:53 PM No comments: