The 8th edition of "Festival of Postcards" is calling for vintage postcards that depict some aspect of geography- maps, landmarks, and so forth. I immediately thought of where I would go for this one. 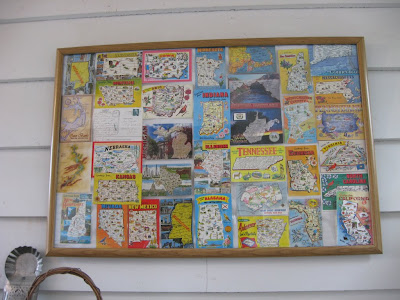 As shown above, I put together some of my STATE postcards and mounted them in a 24 x 36 inch poster frame. I tacked the project to the breezeway of my home so I could look at it every time I go out or enter the house. I tried to put the states into their relative position or locations in the United States: East, Middle, West. I will probably re-do the project some day because I have a few more states to add. You can see "California" was stuck under the edge of the frame in lower right-hand corner. I will have to open the frame and put the state in its relative position. Right below "Montana" (left side), you may be able to see the reverse of a card (stamped and sent from Nebraska, Spring 2005) to my friend telling her of my postcards idea:

"Dear Annie, One of the few things I dream about when I get back to my homey little nest is making a poster of all my state postcards. I believe most of my travels and adventures will now be limited to looking at the cards from my big green arm chair"

At the time, I was working a month-long contract as an instructor in radiation safety at the Fort Collins Nuclear Plant located on the Missouri River, near Blair, Nebraska. Actually, I have collected most of these cards while working at, or enroute to, jobs at nuclear power plants all over the States. Sometimes on my day off, I would browse antique stores and flea markets for vintage cards of the states, such as those shown in the close-up below. I believe the cards of Mississippi, Texas, and Tennessee (with scalloped edges) and a few others out of view could be considered vintage. 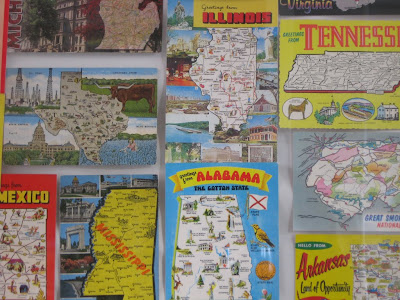 Some of the cards (in first image) like the one of the Great Smokey Mountains and one of the New River (in NC and VA) are close-ups of those particular areas. Many of the cards have pictures of landmarks or activities that are unique to that state which bring back memories to me of when I was there.

Incidentally, I am missing the states of Wyoming, Kentucky, Missouri, and Maine. So, if you have an inkling, please mail* me a card from these states and I will send you a "thank you" postcard from North Carolina (modern). Oh yes, I have been through these states. I even worked a contract at the former Maine Yankee Nuclear Plant- in January!

Postcard collectors and genealogists: Learn about the Festival of Postcards at the web site of our host, Evelyn Yvonne Theriault.

Often when I comtemplate extensive travels, I recall a song made popular by the country singer, Hank Snow, called "I've Been Everywhere". It was the genre's top single in 1962. Johnny Cash also recorded it. I discovered today that the song was originally written about Australian locations according to Wikipedia. By the way, never freely give out your mobile phone number or email with out thinking about it. Now, go to the American version of ... Everywhere and its impossible-to-remember verse lyrics.
Posted by Bob Kramp at 10:52 AM No comments:

Faith of Our Fathers

As I become older (and supposedly wiser), I enjoy looking back into our history and re-discovering some of the values that were held by our earlier generations. Indeed, I am becoming a member of one of those earlier generations myself. And what do I mean by values? I believe I am thinking about the good things in Life's Journey that mean something significant- those things that stick with you and those things that can get you through some tough times.

And so it happened on a recent trip that I noticed an historical marker on my way out of an overnight camp at Kerr Reservoir on the border of North Carolina and Virginia. On State Hwy 39 at Townsville, the marker stated:

It was a beautiful, sunny, early Spring morning, and I could make the time. So, I drove over to the church. There, on this country road on the Piedmont of North Carolina, I stopped to walk around the outside of the church and take some pictures. I wondered what it would have looked like on a similar Sunday in Spring over 200 years ago. 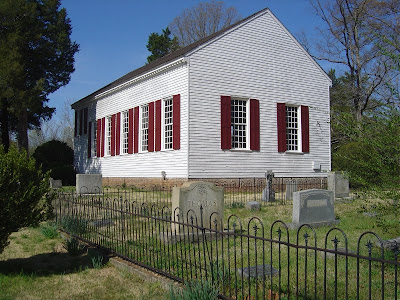 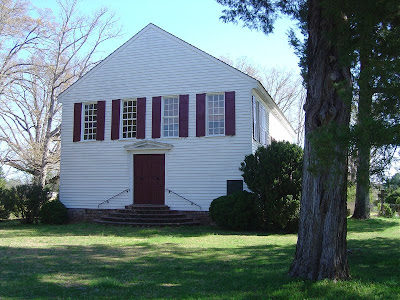 Above: The front of the church was quite unique- large windows, curved steps, giant cedar trees, and a bronze tablet on the right side of the church, above the boxwood bush, that read:

Saint John's Parish Church founded 1746, Williamsborough, North Carolina
This Tablet is erected by the North Carolina Society of the Colonial Dames of America under the auspices of the Vance County Committee, Henderson, NC, Friday, October 25, 1935, in honor of the reverend memory of those who in building the State founded it upon their faith in God,
"Faith of our Fathers, Holy Faith, we will be true to thee till death".
Saint John's Parish was visited in 1749 by Reverend Clement Hall who baptized 184 children.
First Rector, 1766
The Reverend Charles Cupples
Sent out by the Society for the Propagation of the Gospel, London.
First Vestry
(followed by a list of persons)

Can you imagine, my friends, 184 children being baptized on one Sunday. Now, that's a lot of Faith. I looked around the area from my stance in front of the church. Not much else was happening on this Thursday morning on the second day of April.

Post Note: Henderson is the county seat of Vance County, NC. I heard on cable TV, Solid Gold Oldies, that one of The Drifters (recall the tunes, "Under the Boardwalk" and "Up on the Roof") was born in Henderson, NC. They played such great music BACK then.
Posted by Bob Kramp at 2:01 PM No comments: