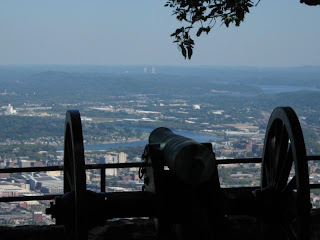 The years-old, traditional tourist attractions of Lookout Mountain have been Rock City and Ruby Falls. Both stem from the natural geologic formations formed underground in the limestone of the Cumberland Mountains. The "Ruby" in Ruby Falls was created by colored lights shining through a high underground waterfall. For two or more generations, motorists saw barns or rooves emblazoned with the words "See Rock City" or "See Ruby Falls". Many artists used these "bill boards" in their paintings of pastoral scenes of the South. Tourist brochures hyped that you could see seven states from Lookout Mountain. Perhaps they meant you could see that many if you were in an airplane flying over the mountain. Nevertheless, I had a fantastic view of Chattanooga and the Tennessee River Valley from atop the mountain as seen in the image above. Right above the cannon's barrel, against the blue horizon, I could barely see the whitish cooling towers of Sequoyah Nuclear Power Plant. Click on image to enlarge.

If you think this is a fantastic view, just think of the view that the Confederate Artillery had of the Union Army of Tennessee when it was laying siege to Chattanooga during the Civil War in 1863. Eventually the Confederates withdrew from the ridge and traveled eastward to Missionary Ridge. It was Lookout Mountain that was referred to in the Battle above the Clouds. 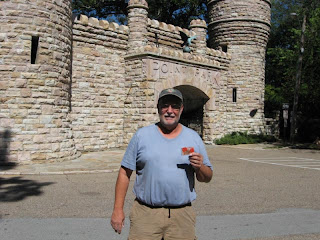 Besides having gained great wisdom, there are a few other benefits of aging. One of these is the Senior Discount. We get discounts at Kohl's Department Store, fast food restaurants, and cinemas for a few examples. A particularly good deal for seniors is the National Parks Pass, formerly known as the Golden Passport. For a lifetime cost of only $10, I now have admission for myself and up to 3 companions (such as grand kids) to nearly 400 national parks and monuments. Here, I'm holding up my recently purchased Parks Pass in front of the entrance to Point Park National Park, a military park memorializing the Civil War battle of Lookout Mountain in Chattanooga, Tennessee.
After the picture was taken, I spun around, stepped off a curb, and promptly fell, causing a severe impact to my knee caps. I wiped off the blood and kept going, but later that evening an apple-sized swelling of blood and fluid collected over my knee and made it so stiff I couldn't bend my leg or walk. I wound up taking an ambulance to the local emergency room. The doctor said I would be on crutches for few days but I only took one day. I believe the fall is also a senior citizen, age-related thing. Maybe I should have applied for my Park Pass several decades earlier and USED it. I hear so many people say, "when I retire ...". Take it now pal.

Or, as Billy Crystal once put it: By the time a man is wise enough to watch his step, he's too old to go anywhere. 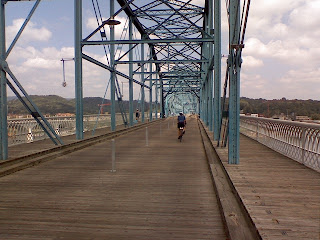 At the southern terminus of the Riverpark trail, I walked my bicycle across the plaza of the Hunter Museum; and then proceeded to the Walnut Street Pedestrian Bridge. Bicyclists take the middle of the wooden planks and strollers take the sidewalks. I had a clear view up and down the Tennessee River which is called the Nickojack Reservoir at this point. A reproduction of a paddle wheel riverboat carrying tourists passed below me on the river. Up river I could see an island which is a refuge for wildlife. I crossed over the bridge to the left bank and bought a banana split ice cream cone at the Subway Shop.
Down river from Walnut St Bridge is the recently opened and re-built Market St. Bridge. As I discovered later, the bridge is a relatively rare class of draw bridge known as a Bascule bridge. Large concrete blocks act as counter weights and help raise the leaves of the bridge like a seesaw. Another example of a Bascule, but smaller, is the Route 1 bridge at Mystic Harbor in Connecticut. I biked across that particular bridge on one of my days off while working at Millstone Nuclear Plant, located on the shores of Long Island Sound, Connecticut. 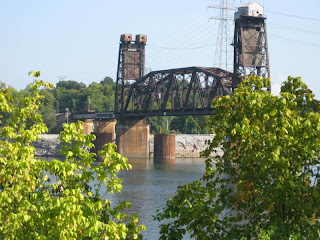 Cincinnati Southern Railroad Bridge as seen from the Riverpark Trail near Chattanooga, TN. The bridge is owned by the city of Cincinnati and was built to carry passengers and goods from Cincinnati to Chattanooga as that city was then a hub for railways fanning out to the southern states. A reporter riding out of Cincinnati on the new line in 1880s called it the Chattanooga Choo Choo. The alliteration was made famous in tune by Glenn Miller's swing band orchestra in 1941.
Posted by Bob Kramp at 6:39 PM No comments: 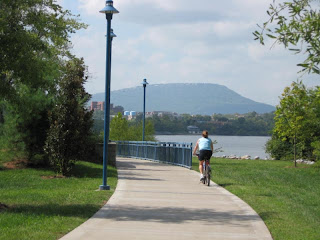 I brought along my bicycle on this trip to a job contract at Sequoyah nuke plant. Glad I did because I discovered a nice hard-surface trail which follows the left bank of the Tennessee River about 8 miles from Chickamauga dam near Hixson, Tennessee, to the cultural center of Chattanooga. By cultural center, I mean the trail ends at the Hunter Museum of American Art. Picture was taken along a section of the trail on which the rider can see the river and Lookout Mountain in the distance.
Posted by Bob Kramp at 6:37 PM No comments: 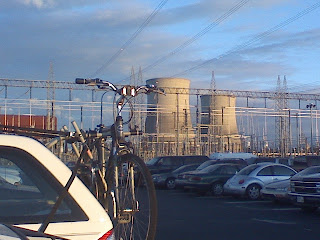 From genealogic research in PA, to a nuke worker at Sequoyah Plant on the banks of Tennessee River. For 5 wks beginning mid-Sep, I will be working as a radiation safety technician- sometimes called Radcon Tech or Health Physicist. I swing a meter which measures dose rates so that workers can be advised of dose rates in their work area and therefore keep their acculumlated doses as low as possible.

The work is intense and we will be working 6 x 12 hrs per week while the plant is being refueled. The utility doesn't make any money when the plant isn't producing electricity. However, I did pack my bicycle in case the weather is nice on Bob's One Day Off.

Sequoyah Nuclear Station was named after a Cherokee Chief and Philosopher who developed a Cherokee alphabet which was then used to translate the Bible and other books- which the indians called "talking leaves". I'm looking forward to being layed-off, so I can get back to indulging myself in "talking leaves" or maybe even "writing leaves". Darn it all, I think we all need more leisure time.