Trip to Washington DC with the grandkids 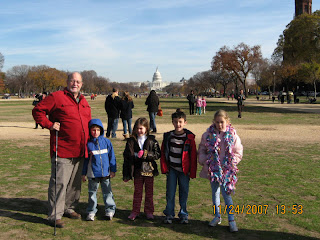 With the nation's capital in the background, pawpaw Kramp stands on the DC Mall with four of his grandchildren. Afterwards, we walked over to the Smithsonian Museum of Natural History and toured the dinosaur, fossil, and gem collections. I believe the kids enjoyed most the ride down on the Metro train.

As a kid myself years ago, I spent many hours in the Smithsonian museums- including the National Zoo. I particularly liked the collections of postage stamps from all over the world, which then was housed in the Smithsonian "castle". 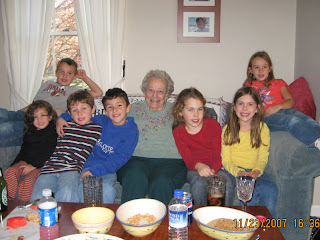 My mother, the former Mary Margaret Gailliot, age 87, is certainly counting her blessings- seven great grandchildren. A rare picture is when we can get all the blessings together at one time on the couch.
Posted by Bob Kramp at 6:38 PM No comments:

Streich surnames on the Immigrant Wall of Honor, Ellis Island 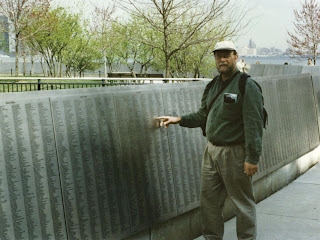 Looks like I'm holding my finger in a dike to keep the island from being flooded. But no, I'm pointing to the Streich surnames on the Immigrant Wall of Honor on Ellis Island. When I visited the Wall in 1997, there were about 500,000 or about half a million former immigrants inscribed. I remember the number being about 10 times higher than the inscriptions on the Vietnam War Memorial Wall in Washington, DC. There were only 4 Streich surnames, but no Kramp, Gailliot, or Gutgsell surnames from my other family branches whose names are rather unique. Inside the restored immigrant processing station, there were computers on which you could look up your surnames of interest and also find the panel number on the Wall where you could find your name inscribed.

One could donate $100 to the Ellis Island Foundation to put a surname on the Wall, but at the time, I thought it would be a better use of my money to further research my genealogy. Birth certificates and other legal documents are not free for the asking. I'm still looking for that rich, new-found cousin to help financially with some of the research. However, genealogy is not everybody's cup of tea. Furthermore, we could use some of that money to inscribe our Gailliot surname on the corner stone of the townhall (Rathaus) in Wesel, Germany, which is currently being restored to its original splendor.

I obtained the donors and their addresses of some of the Streich surnames on the Wall. I then traced one of those persons to a Streich medical doctor someplace in Pennsylvania. I telephoned the individual's office; talked to the receptionist; and later dropped the side trail. That particular Streich individual was not immediately known to be a member of our family line.


Incidentally, when our Streich ancestors came to America in the early 1880s, they were processed at Castle Garden on the mainland of Manhatten, rather than Ellis Island- which wasn't opened until 1892.

A few days ago, a lady stumbled onto my web site, and being descended from a Streich family line, asked me if I had any connection to her family. The surname is rather unique and I have found a few nests of people bearing the Streich surname. I even started a separate database to keep up with these unrelated families. But in this case, there didn't SEEM to be a connection. Nevertheless, I promised her I would post here a photo of the Streich names which I found on the Immigrant Wall of Honor: 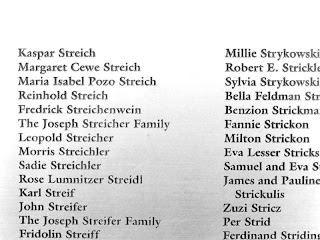 P.S. Thought I better write down the names of the immigrants so that search engines could find the text and hopefully a descendent might get in touch with me: 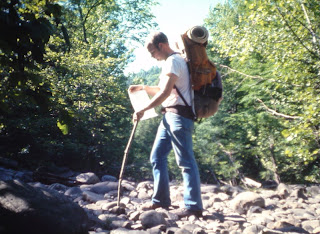 Looking through my photo albums, I found a suitable image to put on a DVD cover for a slide show I recently created. The slide show includes pictures I took between 1975 and 1983. This photo was taken in a wilderness area called The Stone Dor, in middle Tennessee. "Dor" is a geological term for a large crack in a cliff in which one can bodily pass through. This particular Stone Dor was used by indians for many years to pass from the top of the Cumberland escarpment to hunting areas below the rim. The low-land area in this location are called "gulfs".

Since I hiked in the Savage Gulf over 30 years ago, I wondered how the place had changed and of course hoped that the primitive nature of the wilderness had been preserved. Actually I had forgotten the names of towns and markers in the area. Fortunately, there were several references to the Stone Dor and Savage Gulf on the Internet, and I stuffed the web sites into my Favorites. It was interesting to see how the images on the Internet matched my own photos taken many years ago- even to the tree that somehow grew up in shadows of the Dor (see below). 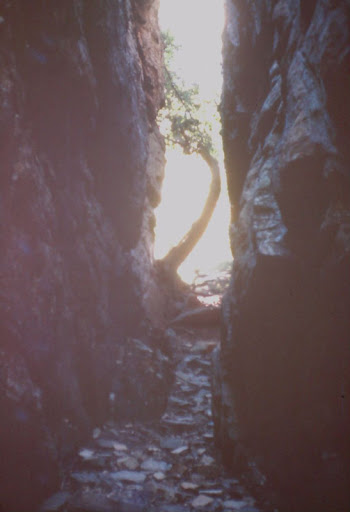 For more on Savage Gulf, go here and here. The last site will probably change one day, but it concerns a hiker, Jeffrey Hunter, who led a group of Chattanooga Hikers to the Savage. From Jeffrey's web entry, I surfed to another interesting web site for Appalachian Trail hikers.

Back in 1977, I was teaching a Sunday School class of teenagers at Bellvue Methodist Church in Nashville. Everyone knows most teenagers need a challenge to stay interested in anything. Nearby the Savage Gulf area, in Beersheba Springs, there were some retreat cabins owned by the Methodist Conference. The Sunday School class decided to hold a weekend retreat at Savage Gulf. I forget the details, but I will never forget the thrills and chills of the teenagers when we climbed down through the Stone Dor; walked under a waterfall; and truely experienced God's country. One morning we met near the ridge of the Gulf and opened our day singing Cat Steven's "Morning has Broken". I wish I could start everyday like that.
Posted by Bob Kramp at 2:15 PM No comments:

I just took at least 5 years off my life. I bought a new Hewlett-Packard lap top with the new Windows Home Premium Vista operating system. My purpose for purchasing the newer, faster computer, was to be able to run some of the more complex software which creates digital slide shows; for example, Adobe's Premier Elements (which would not load on my 2 year-old system without SSE2- huh?). I wish I could have stayed with Windows XP, since I'm finally becoming comfortable with it. However, I didn't have that choice when I bought a new computer. It's either Windows Vista or MacIntosh, or nothing. Unfortunately, only one genealogical computer program is made for the Macs. Most of the programs I use require Windows- at least that's the way I see it.

In any case, several of the wonderful programs which ran perfectly well, or nearly so, on XP, are not compatible with Vista. Also Vista has a lot of problems as you can tell by your first visit to the communal help groups online. The Vista "Help" section has just as many meaningless answers as any of the previous versions. And if you don't understand their answers, you can always contact your Administrator (I guess that's me) or the manufacturer of your hardware or software. Yea, right. Thanks a lot.

So, if your planning to buy a new computer with Windows Vista, plan also on purchasing several hundred dollars worth of new, "Vista ready" software, including the 2007 version of Microsoft's Office- sorry your M/S Office from last year won't work.

Incidentally, Vista comes with about four photographic slide show creators. Two of them send you to web sites to purchase the upgrades. The others are bare bones. Signed, Sour Grapes.
Posted by Bob Kramp at 3:01 PM No comments:

First Baptist in Monroe, NC, on a Fall day 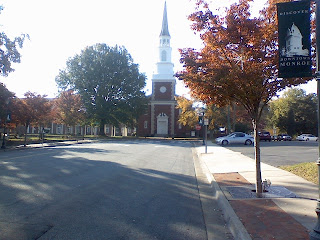 I can upload this image from my cell phone camera but can't edit it beforehand. I'll have to crop it later. I just dropped off my car at the garage in Monroe to be fixed. I piggy-backed my bicycle so that I wouldn't have to wait for the job to be done. So now, I'm biking back home stopping to take a picture and passing by Jule's for cup of java on the way. And also praying that it won't cost an arm and leg to get my car fixed. The brake light on the control panel stays on, blinking red danger, and yelling, "this is going to cost you". Well ... there is always the bicycle. Though it would take a little while to bike from NC to PA in time for Thanksgiving.
Posted by Bob Kramp at 10:12 AM No comments:

The following video was created at an Internet site called http://www.smilebox.com/. The reference is from a bibliography put together by our local librarian for an upcoming seminar, entitled, "Put your genealogy and family on TV". We plan to interest the attendees in several software applications which one can use to present slide shows of vintage, family photographs and simple genealogy charts- sort of like electronic scrapbooks. I will also present some of the hardware needed to "play" the slide shows; for example DVD players and video iPods. The following was a free creation. For a couple of dollars, I could create a video free of advertisements- which I may choose to do later on.

It will take a minute or two to load the buffer after you click on "play" button- watch the grow bar. To escape the video, click on "x" in upper right to close the window.

Update: I went back to Smilebox and the bought the creation for $1.93. I believe it was worth it, because now the creation is free of advertisements, and thus, loads more rapidly, and can be seen full screen.
Posted by Bob Kramp at 2:16 PM No comments: