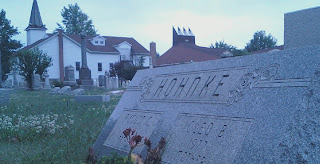 At Weis Library Methodist Church Cemetery, Fairview, near, Erie, PA: August Carl Hohnke, 1882-1953, and Cleo B. (Burkett), 1903-1977. Now I know when August died, and hopefully, I can obtain his obit. Actually the birth dates of the couple are from other sources; the tombstone inscription gave only the death year. August was the 5th of 6 children born to Julius Hohnke & Tillie Sunburg, both of Prussia. Family immigrated 1884 to PA when August was only two years old. Cleo was August's 2nd wife. They had one child, August, the Junior. The Old and New Churches are in background.

UPDATE: After I obtained the year of death for August C. Hohnke, I drove a short distance to the Blasco Public Library in Erie and looked up his obituary in the genealogy room. It is posted at my father's genealogy web site. Click on "August Carl Hohnke" in index.