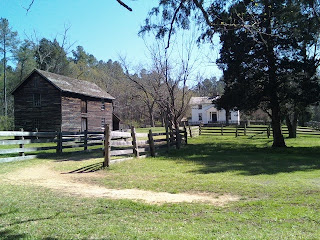 Pioneer and farmer, Washington Duke of NC, was drafted into Confederate Navy. He was captured and became Prisoner of War. After war ended, he walked from New Bern, NC, to this homestead near Durham with 50 cents in his pocket. Here, he and his sons grew Gold Leaf tobacco and founded The American Tobacco Company. Washington's grandson, James Duke, endowed 30 M to Holy Trinity College in 1930 which changed its name to Duke Univ. And now WD's namesake is in the Final Four in NCAA Basketball. The guy can't lose.
Posted by Bob Kramp at 8:28 PM No comments:

Jump and Smile- It's Spring

Art emailed to me from the Grandkids. That might be Emma and Christina and the guy in the middle might be Dad or Pawpaw. But since he has blue eyes and no hair, I would put my money on "Pawpaw". 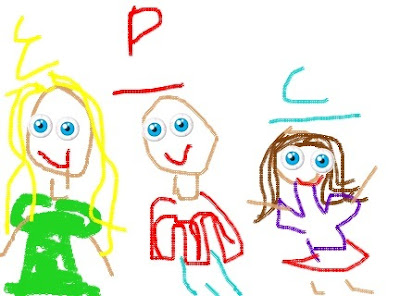 Have a Great Spring everybody.
Posted by Bob Kramp at 6:28 AM 2 comments:

Who do you think you are? Premier episode in America

Wow, double Wow, Triple Wow, Awesome and Un-Be-lievable. And thus, Sally Jessica Parker, star of HBO's "Sex in the City", gushes her way through a gauntlet of professional genealogist, historians, and even park rangers, as they thrust into her hands census reports, death certificates, arrest warrants for witchcraft, and other papers. I really like the way a park ranger and historian in California pulls out of his vest several photocopied papers indicating that one of Sally's maternal ancestors died during the 1849 gold rush. Yes, Wow!

It all seemed to start out with Sally's mother showing her some vintage photos of her grandmother and great grandmother. This is indeed a good start for any person interested in family history or genealogy. But sometimes, it takes months or years of digging through the attics of your relatives. And still, one may come up empty handed. Incidentally, I would have enjoyed spending a few more minutes with Sally's mother and having her relate some personal stories of her life or that of her relatives, or the stories of friends that might have known them. Remember, these are real people.

It seemed that Sally's mother was pretty excited about her daughter's discoveries about their family history. I think at the end of the program, Sally challenged her mother to write up the history. Excellent idea and good example. Of course, they can always see the TV recording.

But it was not like my experience. Years ago, I went home to Mom and started asking her about her past, what she liked about high school and so forth. I recall her response, "Oh Bobby, why do want to know that old stuff for anyway". Perhaps my approach was wrong. Maybe I should of brought along a camera crew.

I believe it is necessary, if at all possible, to go back to the homelands of your ancestors to do research, as Sally did, in going back to Cincinnati, the California gold fields, and the site of the Salem witch trials. It's not always possible, but it sure can round out the life of an ancestor.

I'm not naive, I do know that anything on commercial TV has to be pretty shallow. And in this premier episode, Sally Parker goes back about 400 years of no-brick-walls, family history in about 40 minutes of program time. That's about a decade a minute. Yes, Wow again.

Nevertheless, I will take the drawbacks of TV. I am looking forward to the next episode of this series. I hope they eventually have someone going back and researching Eastern Germany or Pomerania. Pomer-Who?!