This is my first blog entry associated with a group of Genealogy bloggers (so called geneabloggers) who upload vintage postcards to their sites- usually with a certain theme in mind. This month's theme is "white" which could refer simply to a black and white postcard or something white in the context of the picture card.

Following, is a black and white postcard from my collection. It depicts the Pont du (bridge of) Mont Blanc in Geneva, Switzerland. Blanc is French for "white" and refers to the distant snow-covered mountains in the upper left of the picture. Mont Blanc is the highest peak in the Alps, about 15,700+ feet, and can be see from several points around the city of Geneva on a clear day. One can obain excellent views of Mont Blanc and The Alps by climbing to the top of the darker-colored mountain in the foreground which is called Le Saleve, and then, turn around and have spectacular views of Geneva and Lac Leman (Lake Geneva). Mont Blanc is located on the border of France and Italy. 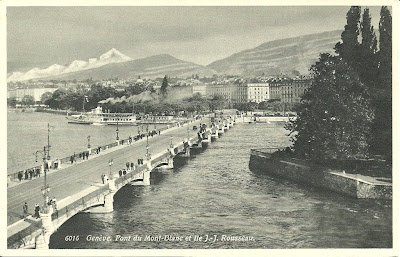 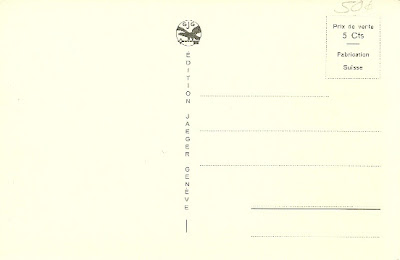 The bridge in the postcard crosses the Rhone River as it exits Lake Geneva (on left) and then continues on to France (on the right). The small island with trees in the middle of the river and to the right of the bridge is the Ile (Isle) de Rousseau. It is named for the philosopher, Jean Jacque Rousseau (1712-1778), who was born in Geneva and whose family lived there. Rousseau's "Discourse on the Origins and Basis of Inequality Among Men", published in 1755, is generally believed to have influenced the French Revolution. He dedicated the Discourse to his hometown of Geneva which he considered the most civil state in Europe.

The significance of this postcard is that it reminds me of the time my young family and I lived in Geneva for about two years between 1973 and 1975. I was on a post doctorate program researching diabetes at the University of Geneva. In our first month, my wife and our two young daughters, 4 and 6 years old, joined me in a walk to the edge of the city, and then we took a ride in a cable car to the top of Le Saleve. There was a little bit of snow on top and we threw a few snowballs.

Later in the Spring, the populace of the whole city celebrated Earth Day by abstaining from driving cars. Riding in the electric trams was OK. I rode my bicycle down to the Pont du Mont Blanc; the bridge was covered with bicyclists and pedestrians- and one very lonely taxi. Incidentally, Earth Day is celebrating its 40th anniversary next year, 2010. So the following pictures taken in 1974, were taken on about the 4th annual Earth Day. 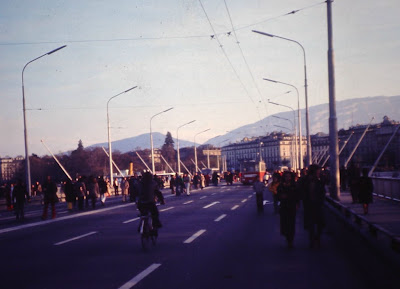 Image: From a 35 mm Kodachrome of Pont du Mont Blanc on Earth Day, 1974. The end of the bridge runs into the old city of Geneva. La Seleve can be seen rising above the city in the distance. Only bicyclists and pedestrians are on bridge and a red-colored electric tram at far end of bridge. In warmer weather, colorful banners and flags were hung on the poles slanting over the bridge railings. 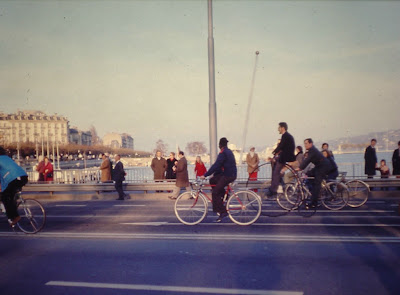 Image: All kinds of bikes were found on the bridge on Earth Day, 1974 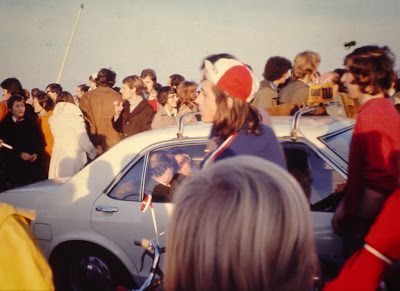 Image: A lone taxi tries to negotiate a path through a disapproving crowd on Pont du Mont Blanc. The passengers were probably coming home from the airport. The lady inside appears to be smiling in good spirits.
If you got here from Therialt's Festival of Postcards, click here to return to the Festival.
LINKS and REFERENCES:
Look up "Rousseau" and "Mont Blanc" on Wikipedia.
For more information on "Festival of Postcards" see Evelyn Theriault's "A Canadian Family" Blog.
Posted by Bob Kramp at 5:39 PM 2 comments:

If you had Russell ancestors and passed a place called Russell Cave, wouldn't you want to know what was inside the cave? I did. So, on my way to my brother-in-law's for Thanksgiving, I took a short side-trip off Interstate 24 between Chattanooga and Nashville, Tennessee, to travel just across the border into Alabama (Jackson County). It was early morning, sunny, and relatively warm for Fall. At the entrance to Russell Cave National Monument, I hauled out my tripod and took this picture. I was initially going to title this blog entry, "I feel a headache coming on". Actually, the spear which appears ready to pierce my scalp was an ancient improvement in the art of spear throwing. The Native American is using an "atlatl" to propel the spear with much more speed and accuracy than the old way of using solely arm power. 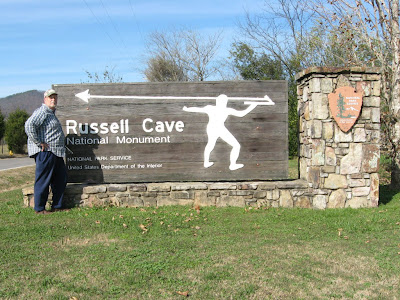 I took a short walk on a boardwalk behind the visitor center and arrived at the entrance to the cave. A good-sized creek ran right into and disappeared inside the cave. In the past, the creek would flood and eventually gouge out a larger cavity. The ceiling of the structure from time to time would split from the upper sandstone, causing a rockfall, which in turn created a raised floor in a large portion of the cave. Thus, Native Americans could live in the cave. It had natural air-conditioning and a ready water supply.

I noticed as I entered the cave that hundreds of large screws with plates had been driven into the ceiling to prevent any further rockfalls- or so the theory goes.

At the visiting center, I learned the unique feature of this cave is that various research groups had excavated artifacts which could demonstrate almost 10,000 years of habitation by Indians of several periods: Archaic, Woodland, and Mississippian. 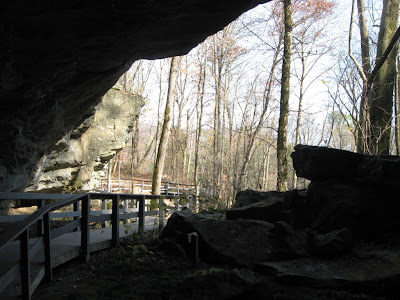 Image (above): The boardwalk begins behind the visitor center and enters the cave.
In relatively modern times, the cave and surrounding land were first owned by Captain John Woods who received the land grant for his service in the Revolutionary War (RW). Woods was a Cherokee Indian which was the first time I heard Indians served in the RW. He also built a stone house on the land which is the oldest house still in use in Jackson County, Alabama. Evidence of Woods' residency in the area eventually faded. The land was then owned for a while by another RW veteran who in turn sold it to his brother-in-law, Colonel THOMAS RUSSELL whose descendants kept it in the family until 1928. The last private owner was Oscar Ridley who allowed excavation of the cave by local, amateur archaeologists. Recognizing the value of these discoveries, the Smithsonian Institute and National Geographic Societies (NGS) became heavily involved. The latter purchased the cave and presented it to the American People which was sealed by the creation of this National Monument by President Kennedy in 1961. 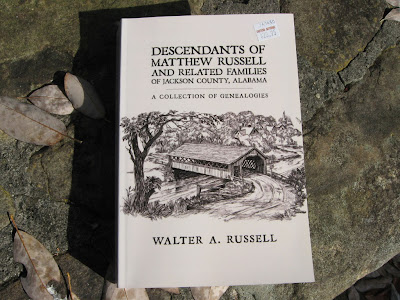 Browsing in the gift shop after my tour of the cave, I found a copy of a substantial genealogy of a Russell family by Walter A. Russell. The park ranger told me that Walter often gives genealogy seminars at the center. Search the title at Amazondotcom and you will find the first 5 pages of the book including the statement, "... first progenitor of this lineage was Matthew Russell who was Scotch-Irish ... born around 1735." You can also view the Index with 7 pages of Russell surnames. I doubt if Matthews family lived in the cave, and the same goes for my Russell family- who didn't arrive in America until 1881.
However, there are some connections to my "Life's Journey".
1. The Russell Cave visitor center was dedicated to former NGS chairman, Gilbert H. Grosvenor, whose former home was in my "home" town of Bethesda, MD.
2. Matthew Russell, the progenitor, once resided in Mechlenburg Co, NC, and York Co, SC, near Revolutionary War sites, Kings Mountain and Cowpens, all located near my current residence.
3. Another book available in the visitor center, was "Selu, Seeking the Corn-Mother's Wisdom" by former Tennessean poet laureate, Marilou Awiakta. She once inspired me to write about where I came from at an Appalachian Writer's workshop at Radford University. Search Amazon book store.
REFERENCES AND LINKS:
National Park Service web site for Russell cave: www.nps.gov/ruca
Posted by Bob Kramp at 1:44 PM 2 comments: