Oh, about a decade or two ago, I spent months traveling around to Scottish Festivals and Fiddler's conventions in southwestern Virginia and North Carolina both learning and playing old time tunes on the banjo- claw hammer style. I also camped at "The Place", a hostel on the Appalachian Trail at Damascus, VA. Here is a sample of pictures and music from those days, led off by a couple of my ancestors who also played music. I am glad that some of my ancestors took the time and effort to learn how to play a musical instrument. I believe a lot of people would like to do the same, but they just do not have the time- or don't want to take the time.

Spring is just two days away, the sun is traveling north and warming things up, and the flowers are blooming. It's time to make up the Spring and early summer schedule for music and dance. You can type in "festivals" in the search bar of this blog and go to my previous entry in which I listed a few links to specific web sites of old time and bluegrass music festivals. But first, I want to emphasize a few nearby events that I will be writing on my own calendar- a sort of wish list. So, here we go.

May 15-17, 2009, is Appalachian Trial Days at Damascus, VA. There is a contra dance Saturday night and FREE showers in the trailer behind the First Baptist Church yard. There are also several eating contests, dog shows, and seminars about the AT. Damascus is probably the most hiker-friendly place on the AT, and the "end to enders" who started out early Spring in Georgia might be arriving in town about the middle of May.

There is a whole lot of fiddling going on at Scottish Festivals, and the The Association of Scottish Games and Festivals has a list of Scottish festivals grouped by state on their web site.

My Father and me, a physical comparison at the same age

I've been obsessed over the last MONTH with efforts to create a Slide Show of my Kramp Line which I can burn to a DVD and see on Television- Ken Burns Style. I have about 600 images in the show at present. Some of the images have taken hours to create in software programs such as Adobe Photoshop Elements or Microsoft's Power Point. One such image appears below- a comparison of my father and myself at about 1 or 2 years old. We seem to share many of the same genes, for example the eyes, mouth and chin. However, my father had a deep fold in his upper lip which I did not inherit. Incidentally, the chin was great for balancing a handle and broom, a feat of which we have demonstrated for many of our descendants. My Dad could also balance a kitchen chair by one of its legs, but I think he had thicker neck muscles than I did. 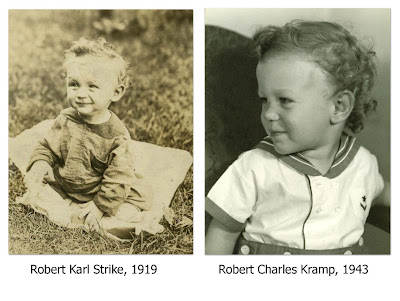 There is a story regarding the picture of me in this collage. The picture is one of seven in a series of different poses photographed by a Mr. Shaneyfelt. He lived in my parent's neighborhood at Auburn Garden Apartments, Del Ray, VA. The year was 1943, and the country was in the middle of WW II. Money was very tight, and there was little work for Mr. Shaneyfelt who was a professional photographer. So, for the love of his craft and his profession, Mr. Shaneyfelt took the pictures of me and practically donated them to my mother. Wouldn't it be neat if one Mr. Shaneyfelt's kin searched his name on Google and wound up here on this site and then contacted me. I would have to tell them that the donations of Mr. Shaneyfelt's photographs to my family were priceless.

Now, I must return to my Slide Show project. Sometimes you have to put everything aside for the time being in order to reach a particular goal. I apologize to my former friends and correspondents who used to know me. But, I am almost there, just a few more days, and then I will be back to my normal activities such as eating, bathing, sleeping, and of course- blogging.