How many direct ancestors have I found on my pedigree in 10 generations (out of 1022 possible persons)?

To find the answer, I created an “Ancestors” report, including generation numbers, in my computer genealogy program, Ancestral Quest.  I did not include myself since I’m really not an ancestor yet. Then, I added up the known ancestors in each generation. Details are shown in the table below (click to enlarge).

Except for the first 2 generations (myself and my parents), most of my ancestors were born overseas, particularly in Germany. Therefore, it is quite challenging- in terms of financial expense and time- to find the names and vital statistics, particularly, of my immigrant ancestors. See the last two columns in the Table.

*Unfortunately, I do not know the PARENTS of my paternal great grandfather, Karl Streich, of Posen or West Prussia.

**Waiting for Ann Robinson’s (and William Hartley’s) 1842 Civil Marriage Registration from GRO (England) to determine her father’s full name. Hopefully, I will be able to find her mother’s first name in 1841 U.K. Census. Thus, the number in this cell may be boosted from 12 to 14 in a couple of weeks. And if I’m really lucky, one of the death certificates I ordered from Pennsylvania Vital Statistics may have the maiden surname of my 2x great grandmother, Augusta (m. Frederick Hohnke), as well as her PARENTS.

As one of the comments attached to Siever’s blog indicated:  it’s the story BEHIND these names that is the most meaningful for a family historian.  And oh yes, I have photographs for 7 out of 8 of my great grandparents. I know what they look like. And you know a picture is worth at least a thousand words. Maybe we should add another statistic- Ancestral Picture Number.

My Pedigree with images.

Camping from a different point of view 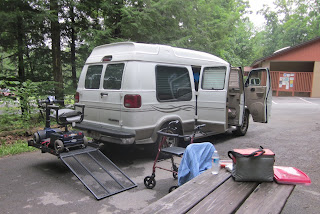 Prince Gallitzen State Park in Clearfield County, Pennsylvania, has some great sites for handi-capped persons. It's a new experience for me and I'm pleased. Can't carry a backpack like I used to. I've learned to adapt.
Posted by Bob Kramp at 10:00 PM 2 comments:

Should I take the time in the middle of the night to write in this blog or should I roll back over and catch more Z's so that I'll be fresh for more German genealogy lectures at this year's GRIPitt conference? That stands for Genealogical Reseach Institute of Pittsburgh and it's a week-long, intensive, genealogical course with both Day and evening lectures and some hands-on exercises to do as well.
Answer: Roll over and get some more rest. There will be plenty of time later to blog. Or will there?
Posted by Bob Kramp at 3:23 AM No comments:

This is a test of my new iPad

I can't seem to upload an image from my iPad. Or, do anything with this "new interface" including swtching back to the old. Patience. I'll keep trying.
I can add more text but only if I use the HTML option. Oh boy, what a mess.

It's 0900 and time to hit the road again. Beautiful Fall weather- can't stay inside and worry about this stuff. Wish the "help" were written in English. What the heck does "send an MMS" mean? Just discovered SMS is acronym for "Short Message Service" which means that one uses an application that usually sends a few words over the Internet, such as Twtter- though I'm not a subscriber. Is SMS so difficult to write out? America, slow down and enjoy life.
Posted by Bob Kramp at 8:48 AM No comments:

New Additions to my Pedigree

For a frame of reference, this was my pedigree BEFORE I spent a week collecting data at the Family History Library in Salt Lake City, Utah. 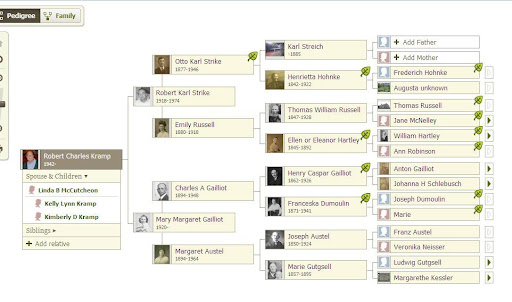 Well, my time is up in Salt Lake City. Time to pack my computer, my notes, and my clothes into a suitcase and fly back to Charlotte, NC.

Before I left for SLC a week ago, I told my family and friends that if could not find even one more person to add to my pedigree, it would be OK- the trip would still be worth it. I just wanted to see this world famous collection of genealogical data at the Mormon's Family History Library; to see what the Library had to offer. I was very impressed and pleased, and moreover, I did climb up a few more branches on my family tree.

Also, I had the opportunity to see changes that are happening at the Library. For example, the Library catalogue is searched by going to FamilySearch(dot)org on the Internet. The "face" of that website is being changed, though I confess I still go back to the old face to perform my searches.

So, I found a lot of new information and pushed back one of my maternal ancestral lines about three generations. I say "about" because I have not had a chance to analyze the new data. I have been sitting in front of the microfilm readers from dawn until way past dusk and feeding nickles into the photocopy machine.

But briefly, follow the bottom line of my mother's branch in the pedigree above. Note that my great, great grandparents were Ludwig Gutgsell and Margarethe Kessler. I obtained their birth dates and places from the death entry of their daughter, Marie, nee. Gutgsell. Her death entry was recorded in the parish record of a catholic church in Burglen, Canton Thurgau, Switzerland, but that's another story. This week, I found the marriage entry (performed on 17 Nov 1847) of Marie's parents on a microfilm of the civil marriage registrations for the commune (village) of Kaysersburg, arrondisement (county) of Colmar, Department of Haut Rhin, in Alsace, which was in French territory at the time. The Germans occupied Alsace from about 1871, until the end of WW I, and then it was returned to France. So, Marie's parents were married by their French names: Louis and Marguerite. I just love the details of genealogical research.

The information didn't stop there, there were many genealogical details in the full-page, marriage entry in this civil record. More research in the microfilm section revealed the marriage entry for the parents of Louis Gutgsell. Louis' father, Andre Gutgsell married Madelaine Scherrer on 28 Jan 1824, in Kaysersburg. I also found some of Andre's siblings. THEN, I discovered that Andre's parents, Leo Gutgsell and Marie Ann Madar, were married in Kayserberg. Finally, the parents of Leo were Joseph Gutgsell and Elizabeth Wachen. If I recall correctly, Andre Gutgsell's marriage entry included the names of his parents and grandparents.

Incidentally, while perusing the microfilms of data from this region of Alsace, I noted another prominent surname, "G'sell". At first I thought it was an abbreviation for my ancestral surname, Gutgsell, but after looking at several family relationships in the records, I do not believe G'sell is equivalent to Gutgsell. Furthermore, Gutgsell seemed to be spelled variously as Guthgsell, Guttgsell, and GutheGsell. To further confound the issue, many times the names of individuals were not captalized.

So, how many generations did I uncover? I believe I am back to my 5X great grandparents on the Gutgsell line. Not a bad effort for a week's research at the largest depository of genealogical data in the world.
Posted by Bob Kramp at 10:19 AM No comments: