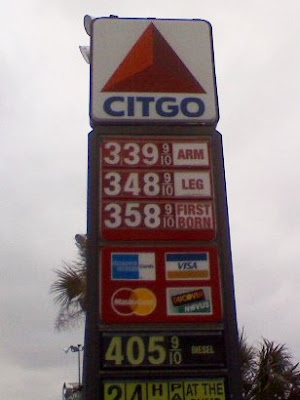 You'll have to look closely to get the point of my entry. I know that gas prices are reaching record heights, but this is rediculous. Sign at Citco station at Southport, NC.

Hey psssst. Wanna know where to go to find out the cheapest gas prices in your own neighborhood? Try this Motor Trend web site and put in your zip code. Thanks, Rudolf.
Posted by Bob Kramp at 1:45 PM No comments:

A walk on the beach at Oak Island, NC 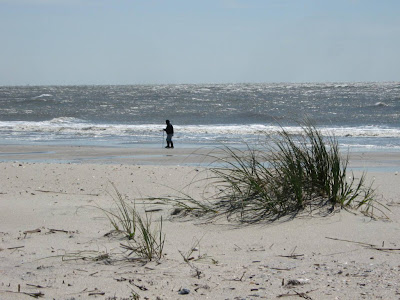 A beautiful, breezy day on the beach in early Spring. Walk a little ways down the beach to an isolated stretch of sand. Lay down on a sand dune which has been swept up by the wind. Pull the hood of my sweat shirt over my bald head to keep the stinging sand away, and close my eyes while the sun warms my face.

I'll be working away from home for about 4 weeks at Brunswick Nuclear Plant located in Southport, NC, near Wilmington. I really hate to come off retirement for this spurt of an intensive work schedule (six 12-hour days per week). But I hope to collect a little travel money and keep a budget as balanced as possible. So, forgive me if I can't recall some of the names or places in these blog entries, especially the historical ones, as my books, notes, and journals are still at the house. However, I will add more information or make corrections later on. Please return for a visit. Have a great walk and a great day wherever you are.
Posted by Bob Kramp at 9:40 AM 1 comment: 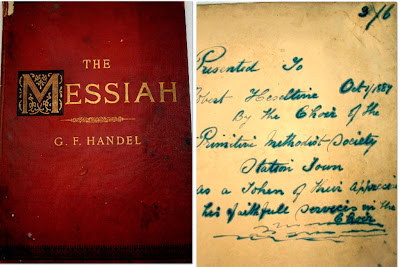 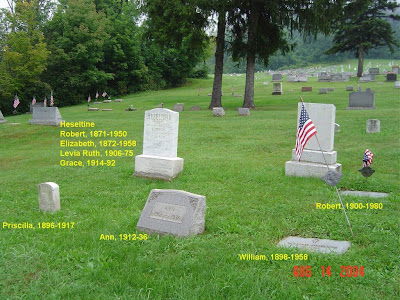 Just in time for Easter, I received an email attachment from a distant cousin which included an heirloom of our family. The image above shows a book of sheet music of George Frideric Handel's "Messiah" which was given to Robert Heseltine from his church choir at Station Town, County Durham, England. Inside the book's cover was written,

"Presented to Robert Heseltine, Oct 1, 1887, by the choir of the Primitive Methodist Society of Station Town as a token of their appreciation of his faithful service in the choir"

The musical score must have been a treasured gift for the rest of Robert's life as it is even mentioned in his obituary. Apparently he became a noted choir singer and was invited to perform in several churches in the area.

Before the turn of the century, Robert Heseltine immigrated to Barnesboro, Cambria County, Pennsylvania (now, Northern Cambria). In 1894, Robert married Elizabeth WEST, daughter of William and Temple West. They raised 7 children in the Methodist church of Barnesboro. The family is buried at Northend Cemetery, Barnesboro (see image above, click to enlarge).

Source of "Messiah" image: Merelyn M. Davis of CA
Posted by Bob Kramp at 9:11 AM 1 comment: 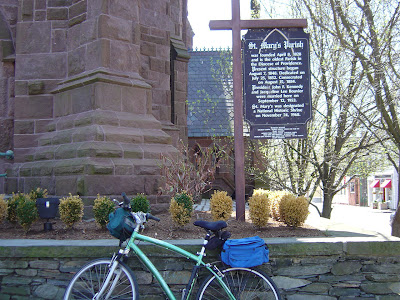 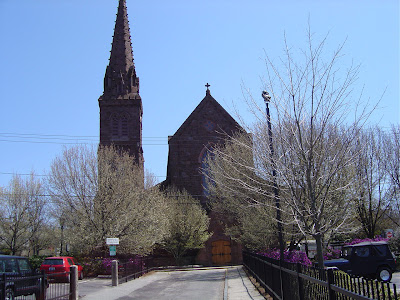 While bicycling around Newport, Rhode Island, in the Spring of 2004, taking pictures of the exquisite mansions, including the Berwind home mentioned in the previous entry, I came upon another historical event of my generation. Here at St. Mary's Catholic church, John F. Kennedy and Jacqueline Lee Bouvier were married on 12 Sep 1953. 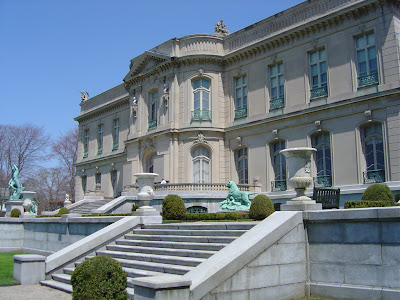 One of the benefits of studying your family history is that often you will come upon a region, a structure, a person, or an event, which will stand out and become much more significant because it has some relavence to your family history. The picture above and the postcard below depicts "The Elms" a mansion once owned by Edward Berwind. It is one of the famous, historical homes of Newport Rhode Island. As I mentioned in my previous entry, my great grandfather's "brother", David Russell, was a secretary for the Berwind and White Coal company and he used to ride the train with one of the Presidents, or it might have been one of its vice presidents. Either way, the officer was more than likely a member of the Berwind Family.


I used quotation marks around the word, brother, because I am not certain of the exact relationship of David Russell to my great grandfather, Thomas W. Russell, but nevertheless, they sat together for a portrait of the Russell brothers at Kruger Studio, in Houtzdale, PA, in 1890s. 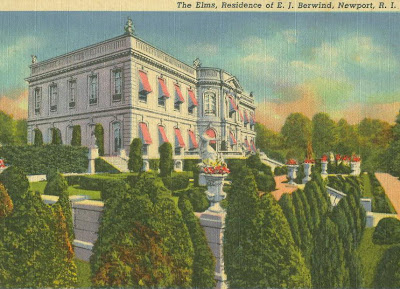 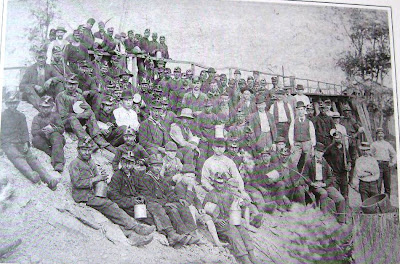 Coal miners and nippers (boys) at the Eureka No. 5 coal mine in Houtzale, Clearfield Co., PA. Click picture to enlarge; then, click on your browser's back-arrow key to return here. Though some of my ancestors are probably present here, none have been identified. Pictures are from the Berwind Story, a Family History, published in 1993.

My Aunt, Mrs. Gladys Hilburt, born Gladys Russell, the daughter of Andrew Burt Russell and Margaret Walker, told me a story about one of the Russell siblings who immigrated to Houtzdale in the 1880s from the coal mining regions of County Durham, England. Gladys told me that David Russell was a secretary for the Berwind and White Coal Company and used to travel around Pennsylvania on a special train with the president of the Company. David once gave a glass an ink well to his nephew, Andrew Russell (Gladys' father). She said that David Russell never married.

I have a vintage, cabinet-card photograph of the Russell siblings taken probably in the early 1890s in Kruger's studio in Houtzdale which shows five brothers: Thomas W. Russell (my great grandfather), Robert and John Girabaldi Russell, James Fredrick Russell and a brother who has been identified as David. In addition, I have obtained 19th century census reports from the U.K. and baptism records for four of the Russell brothers but I could not find such information for a David Russell in the same family.

Also, inside a 19th century journal which was kept by my great grandfather, Thomas Russell, I found a letter, dated, 29 Dec 1911, which was mailed to Thomas by his younger brother, John G. Russell. The letter head was titled, "Century Club of Syracuse [New York]". The context of the letter indicates that John was sorry to hear that their brother had died and that he could not travel from his home in Syracuse to attend the funeral. However, John did not specifically name the brother nor did he mention where the brother's funeral was being held. John requested that his regards be passed to another brother, Robert, and also to the Dawson family. Through a process of elimination and considering the date of the letter, I speculate that the recently deceased brother was David Russell, and that he probably died in PA. John Russell, the author of the letter, died in 1914 of stomach cancer.

In the 1990's, I contacted the Berwind and White Company which then had offices in Philadelphia, PA. The Company had changed and diversified its business to focus on land holdings and other industries such as pharmaceuticals. They had little archived information on its early employees- they had no information, at least readily on hand, about a secretary named David Russell. On the other hand, Berwind and White company had recently published a family history and she sent me a copy of the book. The publication coincided with centennial celebration of the town of Windber, which is located on the border between the Pennsylvania counties of Cambria and Somerset. Windber is a transposition of the Berwind surname. There is also a Berwind, West Virginian named after the coal mines which were owned and operated by the B&W Company.

The once large coal company was founded by the sons of J__ Berwind who immigrated to America from Bavaria, Germany, in the 1840s. He settled in Philadelphia and opened a music shop in which he sold his handmade violins. Later, he became a very successful cabinet maker. His sons went to the best schools in Philadelphia and became employed in the coal industry. Eventually, they became owners of coal mines which opened in west central Pennsylvania. Their grade of coal was used in the making of steel and also for fuel for the many steam ships which were bringing thousands of immigrants to America at the end of the nineteenth century.

Our immigrant ancestors who arrived in Houtzdale, Clearfield County, in the 1880s were certainly affected by the operations of Berwind Family, and I hope that one day some information will surface regarding one of their employees named David Russell.

A Christmas greeting from the Berwind Family.
Source: The Berwind Story
Posted by Bob Kramp at 10:28 PM 1 comment: 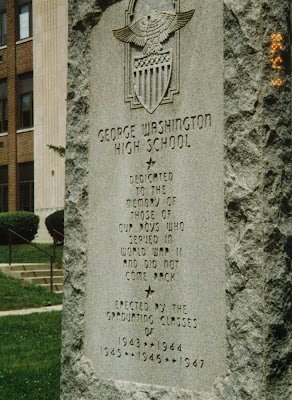 You don't see many of these monuments around modern-day High schools. Most of them are too new. However, here at George Washington High School on Mount Vernon Avenue in Alexandria, VA, is a monument to the fallen soldiers of WW II and former students of the school. It was erected by the graduating classes of 1943, 1944, 1945, and 1947. Names of the fallen are inscribed on another face of the monument.

My mother, Mary Margaret Gailliot, and her brother Charles graduated from the school in 1938. Their yearbooks are archived in the library in Old Town Alexandria.

I just uploaded about 87 images of my Mother's Ancestral Homelands in two albums (Germany, Alsace, Pittsburgh Pennsylvania, and Alexandria Virginia) to my Internet photo album at Picasa. This is a reminder that most of my recent blogged photos and several photos from my genealogy and family history can always be found by scrolling down, looking to the right until you come to "See more photos and slide shows" and click on the link to my Google Picasa albums.

A neat feature of Google's partner, Picasa.com, is that photos can be located on a map so that one can follow the family's migrations around the world. Go to my Picasa album , click on "Mother's Ancestral Homelands" album, scroll down, looking to the left until you see the map, and then enlarge. 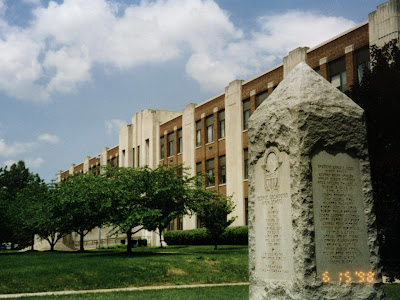