Though the second wife of Thomas Russell, the elder, that is Jane McCallum, had a late child by Thomas, it is possible that she may have born children in a previous marriage. She bore James F. Russell in 1869, when she was 42 years old. If she did have other children, they could have been on their own before she re-married sometime between 1866 and 1869. Thomas Russell, Sr, died in 1880, and Jane (McCallum) Russell died in 1884; both were buried in Durham County, England.

The adult children of Thomas Russell and his FIRST wife, Jame McNelley/ McNally, who were Thomas W. and Robert Russell, immigrated through port of Boston to Houtzdale, Clearfield Co, PA, in Sep 1881. They were followed by James F. and Alma Emma in 1885, through the port of Philadephia, and John G. Russell came to Houtzdale in 1884 via Philadelphia according to his naturalization papers. Since these immigrations began in 1881, I paid little attention to any other Russell immigrants who showed up earlier in Clearfield County, but I was aware of them.

Recently, another family researcher called my attention to the 1880 census of Houtzdale in which another Russell family of Scottish immigrants was enumerated. They were Robert Russell, 33, born abt 1843, his wife Mary, 31, and their four children, Christina, Elizabeth, DAVID, and Alexander. My fellow researcher suggested that son, David, age 5, was my missing person. Incidentally, I posted a picture of a "David" Russell on my Genealogy web site for the past 9 years as a missing person. But, if son, David, was born in 1875, he would have been about 10 years old when the Kruger Studio portrait was taken in 1885 or thereabouts. Though the Kruger picture might have been taken a few years later, the unknown Russell seems to be much older than a teenager, and therefore, unlikely to be Robert's son called David. On the other hand, the father himself, that is Robert Russell, might be the unknown Russell. Moreover, my source found some unconfirmed data on Member Family Trees at Ancestry.com indicating that Robert's full name was Robert McCallum Russell. And that does ring a bell even though it is slightly hollow at this point. Additional data on this family, particularly obituaries, might make the bell ring more clearly.

Oh yes, the 1900 census, indicates that Robert M. Russell and his son, David, were "Stationary Engineers". Does that not sound like a glorified term for "Secretary". Note that my unidentified, male Russell, who was featured in the last blog entry, was a SECRETARY for the Berwind and White Coal Company. According US censuses, Robert M. Russell migrated from Houtzdale, Clearfield Co., to Mount Pleasant, Westmoreland Co. (toward Pittsburgh), between 1880 and 1900. Robert and his wife were still in Mt. Pleasant in 1920. Robert's son, David, was still a bachelor by the 1930 census, aged 54 years.

Most of the time there are crumbs of truth in family tradition. It is up to the family historian to build these crumbs into a whole loaf of bread.
Posted by Bob Kramp at 12:36 PM 1 comment:

Re-thinking the identity of unknown RUSSELL, called David, Part I 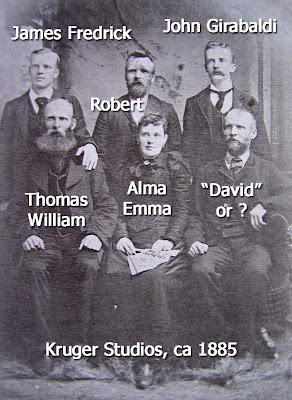 PRIMARY IMAGE: The male Russell, traditionally identified as "David" in this circa 1885, Kruger Studio portrait, might be a case of mistaken identity. Indeed, "David" might be something other than a full blooded sibling to the others, and his name may not be David afterall. Thomas Russell, Sr, and Jane McNELLEY or McNALLY (considered to be one and the same female) are the known parents of John Girabaldi, Thomas William, Robert, and Alma Emma, according to birth registrations or parish records. James Fredrick Russell was the youngest child, born in 1869, the son of Thomas Russell, Sr, and his SECOND wife, Jane McCALLUM. Thus, James F. Russell is a half brother to the others. I have additional pictures of these persons which confirms their identity, however I have no other images of "David". This primary image is a digital scan of a photocopy in the hands of a distant cousin, Suzanne Forsythe, who I met in Spring, 1994. On the reverse of the original cabinet-card photograph someone had written in light pencil the identification of all persons, including a "David" Russell. Unfortunately, I have since lost contact with Ms. Forsythe, who then resided in Buffalo, New York- far from my home. Nevertheless, I was very excited to obtain even this poor quality likeness of my heavily bearded, great grandfather, Thomas William Russell, and his "siblings". Since I came upon the photocopy of these six related or presumably related members of the Russell family, I discovered another cabinet card which depicts all the Russell MALES taken by the same studio at the same time. However, Alma Emma Russell was apparently asked to step out of the group for the second picture shown below. 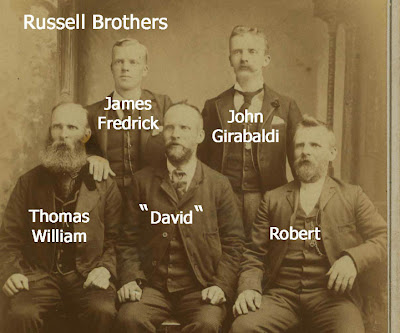 (Click on image to enlarge)
Therefore, I will refer to "David" as the "unidentified Russell", because presently, I am not certain of his true identity. None of my extended family can confirm this man's first name. Mrs. Gladys (Russell) Hilburt, a granddaughter of Robert Russell (front row, right) told me that the unidentified male- she could not recall his name- was a bachelor and that he worked as a secretary to the corporate officers of Berwind and White Coal Company. He attended them as they made their rounds of the company-owned, coal mines in western PA. Also, Gladys once had an ink well that was given to her father by this traveling "uncle" as she referred to him. Unfortunately, the ink well has disappeared.
One other piece of evidence survives regarding the unidentified Russell. John G. Russell wrote a letter (see below) to his brother, Thomas William Russell, regarding one of their brothers who had died recently, but unfortunately, he never mentioned the name of the deceased.
"December 29, 1911"
"Dear Brother:"
"You will no doubt think it strange at not receiving word from me since the death of our poor brother. My silence might indicate a want of feeling, but I can assure you that such is not the case. I have thought of him ever since his demise, and have been going to write you ever since I got the news of his death, but have had no heart."
"I am only sorry that I did not try to see him before he died, but it is too late now. I would have been at his funeral, but I got the news too late. I did not know of it until three o’clock on the Sunday afternoon following the day that he died, and then I did not have his address. It would have taken me ten hours to get there and then I did not know where to find them. I wish someone had sent and told me his condition and his address. However, he has just gone a step before us, and, "After life’s fitful fever he sleeps well". His life was not a bed of roses. And God knows best. ..."
"Remember me kindly to brother Bob and all your family, also Dawson and family."
"With Kindest regards to all, I am your brother, John. 601 Montgomery St, Syracuse, N.Y."
NOTE regarding letter: John requested that his regards be passed to brother, Bob (Robert), and also to the Dawson family. By elimination and considering the date of the letter, I speculate that the recently deceased brother was the unidentifed Russell, and he probably died in PA. John G. Russell, died in 1914 of stomach cancer, three years after penning this letter. The sister, Alma Emma Russell, died in 1951, and the half-brother, James F. Russell, died in 1957; both were buried in Syacuse, NY.
There were other children in the first generation: Mary, born 1950; Jane, 1951; Janet, 1956; and Sarah Rebecca, born 1864- all daughters. The final fate of Mary and Jane are not known. Sarah Rebecca, married Thomas Dawson; they had 5 children, but then, Sarah died aged 28 years in 1892; Janet Russell, married a Thomas Parkinson, and they had 11 children before she died in 1899, aged 43 years. Thus, at least four females in the first generation had married and probably remained behind in England when the others departed for America. The oldest in the first generation was William R. Russell. He was born in Scotland in 1845, about one year before Thomas William Russell. William married Mary Ann Laverick, and they had four children. William's family was enumerated in Tudhoe, Durham Co, in 1881, after which time they can not be found. One of William's children died within a year of birth. William Russell was not present in the 1885 Kruger Studio portrait and there is no evidence that he ever immigrated- at least to America.
Realize that all these children in the first generation and their own families can be followed in the censuses from 1851 through 1881 in County Durham, England. A few family members can be followed in England beyond 1881 as parents in the next generation.
Posted by Bob Kramp at 11:52 AM 1 comment: