Path of the Flood Trail- Conemaugh to Johnstown PA 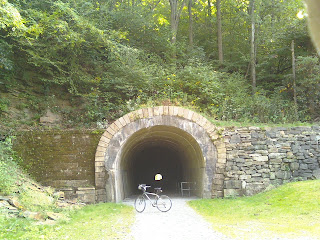 Image: Staple Bend Tunnel is oldest railroad tunnel in America, built in early 1830s. It is part of the Allegheny Portage Railroad that transported goods and passengers over the Allegheny Mountain Range. If your ancestors traveled from Philadelphia to Pittsburg between 1834 -1854, they probably went through this tunnel- so did some of the famous- like author Charles Dickens, soprano Jenny Lind, PT Barnum, and even the body of President William H. Harrison. I trusted the stone work of the Irish and Welsh immigrants who dug this tunnel so that I didn't hesitate to ride my bike through. But nevertheless, I was glad to see the light again at the other end. The Little Conemaugh River running beside the trail is the same that carried the flood waters which destroyed Johnstown in 1889. And it's worth noting that my father's first cousin, Martha Strike, the only known daughter of Julius Strike, is buried in South Fork Cemetery, another town in the flood's path. Fortunately, She was born in November, 1904, about 15 years after The Flood.
Posted by Bob Kramp at 7:36 PM No comments: 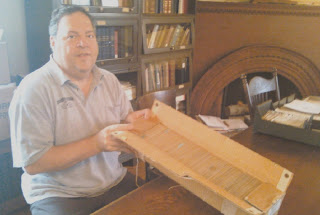 My biological paternal grandfather, Otto Strike, was the ice plant operator at Cresson Tuberculosis Sanitarium, PA, and died at the "San" from a heart attack in May 1946, according to his death certificate- and he was widowed.

I have been looking for Otto's 1930 census enumeration, but thus far, have not been able to find him. I browsed hundreds of doctors, nurses, employees, and patients who were enumerated at the San in 1930, but Otto was not among them. Maybe, he'll be in the 1940 census to be released to the public in 2012.

In the meantime, genealogists who are looking for FAMILY members who were patients at the San between 1924 and 1931, might consult an archived item at Cambria County Historical Society in Ebensburg, PA. Four boxes of index cards, ~9000 TB patient records were found in the attic of the Administration Building, State School No. 7, which is now a State Prison. The cards were turned over by the Superintendant to Cambria Co. Historical Society. In the image above, one of the boxes is held by Dave Huber of CCHS.

UPDATE: I just re-read Otto Strike's 1946 obituary, and it states that Otto worked at the Cresson Sanitarium for the previous 13 years; that is, 1933 to 1946. Thus, it seems that Otto had not started work at the Sanitarium by the 1930 census. The question remaines: where was Otto at that time? 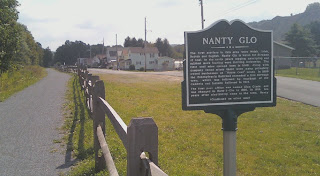 One of my favorite Rail-Trails in PA is the Ghost Town R-T. Here, I can travel through the heritage and culture of my coal mining ancestors. Once, there were many well-populated coal mining towns, some set up by the patronizing coal companies themselves. The miners paid rent to the company and spent their script at the company store. All that is gone now. The former towns that once lined Black Lick Creek and the railroad which ran beside it are "ghosts" today. Here, the trail runs through Nan T Glo, or Nanty Glo, which in Welsh means "stream of coal". On far right, one can still see eroded mountains of slag or "boney" piles- waste from coal mining operations. The run-off from these acidic wastes taints the waters of BL Creek. Reclamation is underway, but the job is monumental. In 2005, Trail was extended 8 more miles to Ebensburg- county seat of Cambria.

"... It will form like a habit and seap in your soul/ Till the stream of your blood is as black as the coal". From "Dark as a Dungeon" 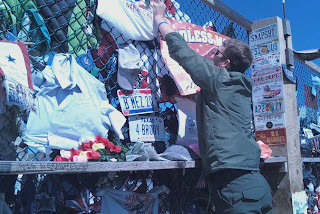 A Park Volunteer "Ambassador" hangs a banner on the Flight 93 temporary memorial- donated today by "Endless Mountain Hog Chapter (motorcycle), Mansfield, PA. There are tens of thousands of personal remembrances at the site reflecting our history and culture- from plastic airplanes to service metals to clothing, like T-shirts, caps, & firemen's protective gear. A permanent memorial begins construction Fall 2009, for completion on the 10th anniversary of the terrorist attacks 9-11-2011.
Posted by Bob Kramp at 8:38 AM No comments: 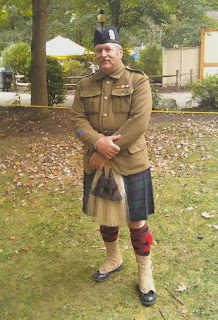 Started off from Monroe, NC, Fri noon; first camp Sutten Lake, WV, off 219. Next day at Ligonier Scottish Games, PA. You can read or surf the Internet about it, or hear it live from this historian re-enacting a WWI soldier of Black Watch Regiment. The Glengerry (cap) was exchanged for a steel helmet during war. Argyle socks were replaced by canvas wrap, ~1916, two years after the war started. "RH" insignia on epulets stood for Royal Highlanders. See one of our own ancestors who changed his surname from Parkinson to Russell so that he could serve with a kilt-clad, Tyneside Regiment during WW I.
Posted by Bob Kramp at 10:13 AM No comments: