A Closer Look at Text and Photo books

In my last entry, I wrote about my plan in 2011 to create more booklets, emphasizing my family history and autobiography. Was it a new year's resolution? Perhaps. But no doubt, I want to preserve my family history that I've been collecting for the past 20 years and preferably preserve it in a book. Last year I started making small photo books of about 20 to 40 pages using some of the Internet photo album web sites. I presented a picture of several books that I created using the photo book feature of Snapfish(dot)com and Shutterfly(dot)com. I also created photo books with more extensive captions or even stories using the free-download application called BookSmart by Blurb(dot)com.

A reader of my blog, let me call him George, contacted me and asked me if "Blurb books" was fulfilling my need for publishing my family history. George also asked me if had thought of using the book feature at Ancestry(dot)com. And finally, he asked me if had any further thoughts or comments on Blurb books.

I have dabbled with the Ancestry book feature but have not followed through with a complete book. However, three start-up attempts sit in "MyCanvas Projects" at Ancestrydotcom waiting for me to return to work on them. So far, they look pretty good- just need another rainy day.

I have created two books with Blurb, and until today, they sat on the "bookshelf" at their website marked as "private"- for my eyes only or for those who I invite. But now, I changed the privacy setting to "public" so that George or anyone else can see one of my first books entitled, "What about Bob?" I stole the title from a movie which starred Bill Murry, and yes, my name is Bob. Furthermore, Blurb allows me the option of sharing the book via several different links (Facebook, Twitter, and so forth). I took the option of embedding the widget in this blog as shown below (click on the miniture, and then, "preview book"). You can see the use of both text and picture frames to create a book of this type. You can also buy the book, but it's not necessary. I could never be a salesman.

What about Bob ?
A Genealogy and Pic...
By Robert Charles Kramp

Book Preview
What do you think, George?
Posted by Bob Kramp at 5:28 PM 4 comments:

Genealogical Research and Writing Plan for 2011- Get the books out

As the year 2011 begins, I am focusing on what will be my genealogical research and and writing plans for the coming year. Of course, the research will continue- checking off my long list of "to do" items. Actually, my genealogical computer program, Ancestral Quest, can print out a report of these research items. First thing I must do is edit this report, deleting those projects that have already been accomplished.

But most of all, I want to get my genealogical data and family history published. I've already spent much time posting the results of my studies on the Internet such as a Public Family Tree (Kramp Family) at Ancestry(dot)com, at web sites for both the paternal and maternal branches of my Tree (scroll down right side panel), and on this blog. I've also posted images to several Internet photo albums and uploaded videos to Youtube(dot)com and Roxio PhotoShow. However, I'm experienced enough to know that much of this information on the Internet is always in jeopardy of being lost. Some of you may remember the shut down of Yahoo's photo album feature. Others may remember the merge of Geocities with Yahoo and then the total removal of all content from their web site. I had to rush to transfer my Mother's genealogical web site to another server.

I believe that the BOOK is still the best means of preserving and passing on one's family history and genealogy. It circumvents the necessity of modifying your data to keep up with newer technological advances in the computer age- the so-called "migration" of data. Just yesterday, I discovered that I couldn't open a document created in an old version of Microsoft Word with the newest version. I finally got around the problem, but I do not want to worry about these glitches. And hey, realize your valuable documents and data are in an electronic environment. Now I ask you, have you ever seen an electron or held it in your hand. No thank you, I would rather have a book in my hands.

In late Spring of 2010, I created my first hard copy photograph albums, called PhotoBooks, at Snapfish(dot)com. See image below. I made one for Mother's Day which included dozens of photos taken throughout her life. Original photos were scanned and uploaded to Snapfish. Then, while on-line, I used templates to arrange from one to eight digital images on a page. The PhotoBook was then mailed to me and another copy mailed to my mother. A few weeks later, I created a PhotoBook of images of my late father.

The image above shows three books (top) created at Snapfish(dot)com; two books (on right) created at Shutterfly(dot)com, and two books (on left) created at Blurb(dot)com. If you enlarge the image, you can read the titles. I have started a series of books in which each book includes images of a chosen decade, for example, photographs taken between 1930 and 1940, between 1940 and 1950 and so on. The book entitled, 1915-1941 was a mistake. I meant 1915 to 1930. Can you imagine creating an incorrect title. Big boo boo. I can correct the mistake on future editions.

The books were easy to create once I took a few hours to practice. The creating process for Blurb books was much more flexible- I could place the image and caption frames where I wanted them on each page. Also, I performed a free download of their "Smart Book" application to my computer's hard drive so that I could create and edit a book OFF-line before making the final submission for printing.

I passed copies of these books to my married children and was surprised to hear that they loved them. They usually roll their eyes to the back of their heads when I start taking family history. Particularly, they enjoyed going through the book in just one sitting.

As seen in the image below, I also gave a copy of the 1930-1940 book to my mother for her 90th birthday last November. She spent her teen-aged years in this decade. She is standing far right in the cover photograph. 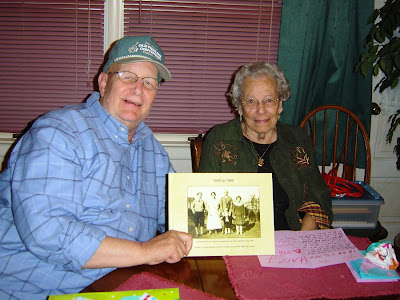 So, in 2011, I hope to continue to self-publish these booklets which contain many vintage as well as recent photographs (digital copies) pertaining to my family history.

This blog entry was posted for the 101st Carnival of Genealogy for Geneabloggers.

Blurb(dot)com allows me to publicize my book, "What About Bob", on their Internet bookshelf. It is half genealogy, half autobiography, and short. If you want to leaf through the book, go to my next entry and click on the gadget at the bottom of the page.

YouTube(dot)com videos of my genealogy in Part I (me thru grandparents) and Part II (beyond grandparents). Forgive me the inappropriate background music- I had to be aware of copyrights. I need to redo this whole project, but not in 2011.

My public slide shows at Roxio PhotoShow on the Internet.
Posted by Bob Kramp at 6:10 PM 6 comments: