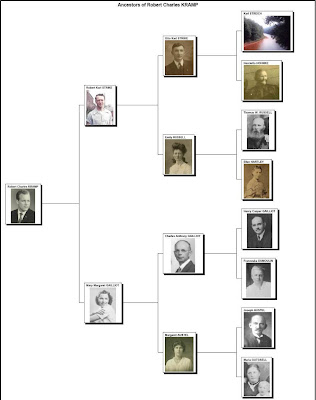 I have been fortunate enough to obtain facial images for 7 of my 8 great grandparents. Click to enlarge.
Recently I read the results of an interesting survey in Eastman's Online Genealogical Newsletter which was posted 24 Mar 2008. The findings of the survey showed that Americans lacked a knowledge of their family history and in particular their pedigree. The survey was sponsored by The Generations Network (parent company of Ancestry.com) and conducted by an independent source.

So I thought how I would respond to this survey. Everyone has eight biological great grandparents. For an extra measure, I also provided vital statistics including locations. I numbered my great grandparents according to the "Ahnentafel" system:

I've been collecting these data for about 16 or more years, but I tried to recall the above without peeping into my computer's database. I also made these observations:

The survey results continued:
*Twenty-two percent of Americans don't know what either of their grandfathers did for a living.

My Response: My paternal grandfather, Otto Strike, was a coal miner; then a machinist for American Car and Foundry Company in Detroit- they made most of the nation's street cars; then a maintenance man (ice plant operator) at Cresson Tuberculosis Sanitarium, PA. My maternal grandfather, Charles Gailliot, was a pattern maker for the Navy Yard in DC.

*Although America is known as a nation of immigrants, 27 percent don't know where their family lived before they came to America.

My Response: I did pretty good on this one. I have even visited the birth places of 3 of my great grandparents: Thomas W. Russell in Holytown, Lanarkshire, Scotland; Henry C. Gailliot, in Wesel, Germany; and Franceska Dumoulin, in Reoschwoog, Alsace. My goal of course would be to visit all birthplaces. You'll hear about it here.

*The study also found that in comparing regions, Southerners know the least about their roots. Only 38 percent know both of their grandmothers' maiden names, compared with 50 percent of Northeasterners.
No comment.

*Young Americans are looking to their roots- 83 percent of 18 to 34 year-olds are interested in learning their family history. Following closely are the 35 to 54 year-olds at 77 percent and Americans ages 55+ at 73 percent.

This surprised me as I thought older Americans would be most interested in knowing their ancestors- after all they will meet them sooner rather than later. And, it would be nice to be acquainted with their names and where they were from- just to make conversation.